Skivvies are Not Clothing

So…this week I am (for the most part) footloose and fancy free.

And no, I am not holding high school proms in barns with the assistance of Kevin Bacon. I’m certain you know what I mean.

But here’s a musical interlude for you, because that quintessential song has undoubtedly popped into your head. Feel free to listen as you read the post. Or stop and watch the whole thing...it's entertaining, for sure. (My 11yo's comment about it was "What in the world are they wearing?!?")

My 13yo is at church camp for the week...I am certain, though, that you knew this, as you undoubtedly read my blog faithfully each day. And I (without intent…seriously, though you may have your doubts) signed up my 11yo for Pacers Basketball Daycamp this same week.

“So what have I been up to?”, you are surely asking.

Well, on Monday I spent the day with my mama. We went to Starbucks and then to an outlet mall where she bought me some clothes. I lucked out that my 11yo only wanted socks the last time she took the PBA shopping, so she spent his share on me. Thanks, Mom! Oh…and then we had frozen custard for lunch.

On Tuesday, I went to the gym (where I could workout without the added bonus of the 11yo asking every 2 minutes, “How much longer?”) and then met a friend at Starbucks (the one inside the local Target…and yes, you are seeing a theme. I also went on Thursday and have plans to meet another friend there today as well. No worries...I have a gift card!) and we cruised the clearance sections while chatting and sipping our beverages.

I had tucked in my purse before I left the house a few Target-specific coupons: one for a half-price frappuccino (only good at the Target Starbucks), one for BOGO on spray-on sunscreen, and one for “$2 off Women’s Apparel Item”. 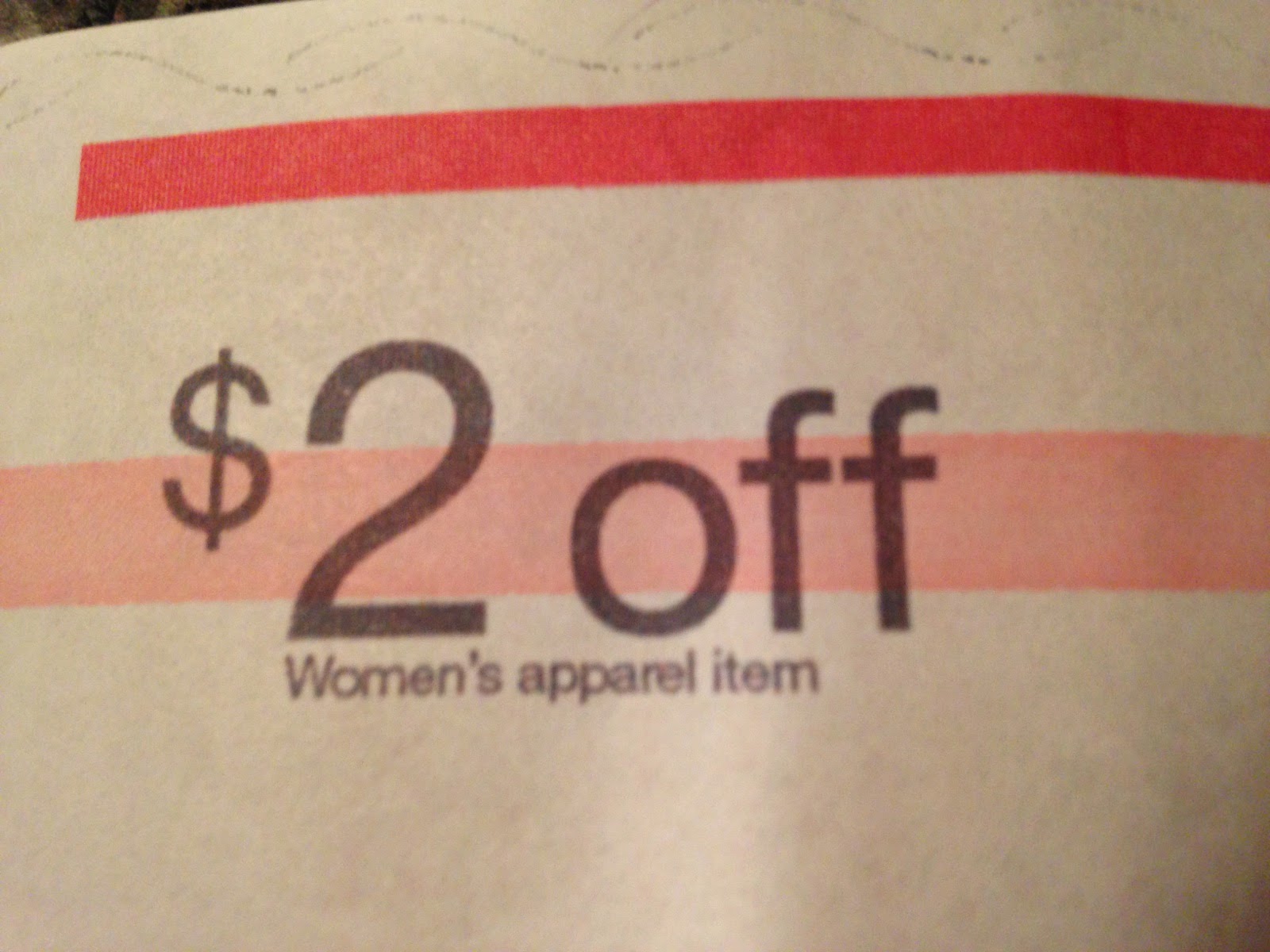 Well, I knew the Starbucks coupon would be no problem to spend. My only potential stall-out was actually looking at the calories listed for each drink. (Because I know you want to know, I did get the coffee frappuccino with non-fat milk…which was the cheapest one and also the lowest calorie count. I did get some whipped cream on top, though, which probably blew the whole thing out of the water. Don't judge.)

Now, the sunscreen presented more of a challenge. It was also a Target-specific coupon which I had (somehow) received in the mail a few weeks ago. It was for a new sunscreen by Coppertone, and it was offering them BOGO.

If you know anything at all about spray-on sunscreen, it is one of the best inventions of the 21st century. (Maybe I exaggerate a bit...a hyperbole, if you will...you all remember that term from high school English class, right? I'm certain you do...but I digress. That spray-on sunscreen stuff…it’s pretty awesome).

But it is also kind of crazy-expensive. So a BOGO (let me pause here and explain BOGO…Mr. AR only recently learned what that meant so I shall presume that someone out there reading this is also a bit in the dark. BOGO=Buy One Get One.)

Anyway, I'm certain you can see why this coupon was a real boon.

But it did take me/us a while to find it in the store.  (And yes...I put my friend to work. Let me pause here a moment and offer just a word for all of you out there who may ever consider going shopping with me: I don't mess around and if you go shopping with me, prepare yourself to possibly be bossed into searching for things, trying on things, holding things, etc. It's not easy to be my shopping friend; not for the faint of heart, for sure. Consider yourself warned. Only the serious need apply.)  Target had sunscreen available for sale in about 8 different places.

Spray-on sunscreen prices being what they are, I thought it was reasonable. I learned how reasonable when I later that day went to both CVS and Walgreens. And because I am just like that, I checked their prices on the same sunscreen.

Yes, I’m living on the edge during my “free time” this week, aren’t I? Don't judge.

For that price, this stuff should automatically reapply itself every 2 hours.

All that to say, Target did me a favor.

But I am certain you are still wondering about my last coupon…I still had my “$2 off Women’s Apparel Item” coupon burning a proverbial hole in my pocket. I must tell you (in case you were unaware) that often those kinds of coupons from Target give a stipulation: $3 off $20.,. or something to that affect.

I don’t want to spend a stinkin’ 20 bucks (pardon my language); I want to see how close I can get to the $3 and spend as little (or no…that’s a totally different level of shopping high right there) money as possible.

So…this $2 coupon was a rare find.

Feel free to shake your head at the mere fact that I know that. I am a little embarrassed about it myself.

But not embarrassed enough to still try.

And trust me: my embarrassment level in this story has not reached it max just yet.
My goal for the day: find a women’s apparel item for as close to $2 as possible.

It is goals like these which have gotten me to where I am in life…clearly.

We searched high and low through the clearance racks. I have to admit…Target Clearance was kind of letting me down yesterday. I wasn’t finding any deals…even in the 70% off clothing racks.

So I decided to switch gears and check out skivvies and socks.

Hey…who couldn’t use an additional pair of skivvies or socks?

Well…the regular price of individual skivvies was $5. That seems a little crazy to me.

But then I stumbled upon some clearance ones. They were $2.50 each.

I supposed I could suck it up and pay 50 cents for a new pair of skivvies. Plus I didn’t see another way I was going to fulfill my goal.

And it’s all about achieving the goal, right?

So…in my cart I had my BOGO sunscreen and my $2.50 skivvies.

Oh...and one banana. I didn’t mention that earlier b/c I didn’t have a coupon for it. Frankly, I only needed one banana; please let me explain: My 11yo needed to pack lunch every day this week for camp and I didn’t quite have enough bananas for each day. He wouldn’t have one on Friday and Heaven-forbid he not have fruit in his lunch (that’s me driving that train, not him)…and since I wasn’t going to go to the grocery until Friday, I was trying to rectify that “issue” before then.

All that to say, I didn’t realize how odd my assortment of purchases appeared until I put them on the belt: one pair of skivvies, one banana, and two bottles of spray-on sunscreen.

Yeah…you can shake your head at that. I know I did.

Anyway…the real fun was about to be had. The cashier scanned my items. And didn’t even comment…thankfully.

Then she scanned the coupons:

Cashier: This one won’t work (showing me the coupon, as though I had not seen it before: remember, lady…I’m the one who just handed it to you?).

Me: But I bought a pair of underwear.

Cashier: (re-reading the coupon) Well, they mean, like, clothing.

Let me pause right here and submit for your perusal the coupon…does it give any stipulations about what is included or excluded? Does it say “no clearance” or “no skivvies or socks”? No…it does not…because I read my coupons carefully, so as to avoid such issues at the check-out...especially when it comes to such items as skivvies, because no one wants to be standing at the check-out register at the target, haggling over the price of a pair of panties.

And yet...I found the courage to soldier on. 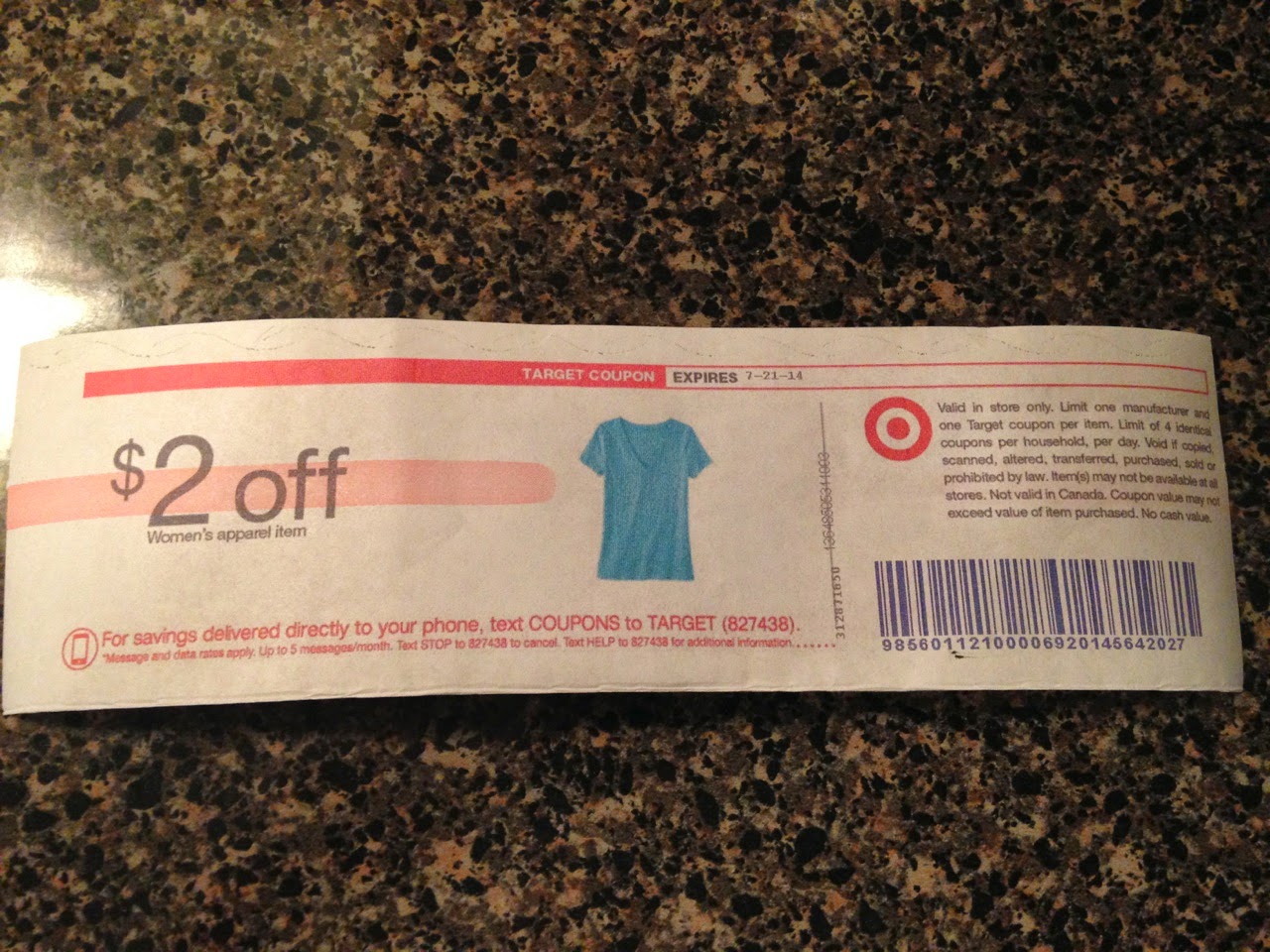 Me: Isn’t underwear clothing? (now turning to the woman in line behind me, looking for some solidarity; I received none. But I did get an eyeroll from her, so that was good. It made me miss my boys.)

Cashier: No, not really…

Me: Well then what is it?

So there we have it people…breaking news from the Target checkout: skivvies are NOT clothing. We don’t know what they are, but they are most definitely NOT clothing. Or apparel.

And because I am certain you wanted to know, I then had her remove the skivvies from my purchase…I was already in up to my chin. Why not finish myself off...no way could it get more embarrassing.

This action also warranted an additional eyeroll from the customer next in line.

So my coupon lives to see another day. Frankly, it only gives me another excuse to go back to try my personal challenge again.

To quote Arnold: I’ll be back! (Because there are so many similarities between me and Arnold Schwarzenegger...this is just one.)

Random Stuff About Me

Mrs. Always Random
Midwest, United States
I will be fostering (hence the blog name…see what I did there? No, not just a clever name b/c I am a foster care advocate; this technique is called a double-entendre…look at me teaching so much already. Perhaps I under-estimated myself and my educational abilities...) the woman I feel God has meant me to be: a writer, a sharer, a story-teller, a friend, a listener, a prayer-warrior and lots of other hopefully-funny, silly, and crazy things.

People Seem to Enjoy These the Most

A Random Assortment of Blogs I Love